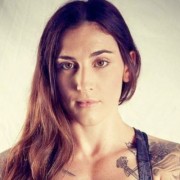 Joining the promotion will be Australian featherweight Megan Anderson (4-1).

“I’m very excited to be joining the Invicta roster,” said the fighter. “Invicta FC is a very respected and well-renowned organization and they are one of the front runners in the growth and rise of women in mixed martial arts. Being signed to an international promotion such as Invicta, it’s the ultimate dream for anyone in mixed martial arts. I’m very excited to be able to show them what this Aussie can do.”

“I’m very honored and proud to be representing my country in the Invicta cage,” said Anderson. “We may be far away from the action, but we certainly bring it every time we step into that cage.”

“I go in there to get the job done in the most ruthless and brutal way possible!,” declared Anderson. “The only thing I’ve got to say to the other women in the division is you’ve all officially been put on notice.”

Look for Anderson’s promotional debut to take place later in 2015.